This work is licensed under a Creative Commons Attribution-NonCommercial-NoDerivatives 4.0 International License.
Attribution must be made to George K. Staropoli as author.

Listen to all podcasts

DO NOT ask personal HOA questions here, they will not be answered.

Legal Disclaimer The information contained in this written or electronic communication, and our associated web sites and blog, is provided as a service to the Internet community, and does not constitute legal advice. We try to provide quality information, but we make no claims, promises or guarantees about the accuracy, completeness, or adequacy of the information contained in or linked to this web site and its associated sites. As legal advice must be tailored to the specific circumstances of each case, and laws are constantly changing, nothing provided herein should be used as a substitute for the advice of competent counsel. No person associated with AHLIS or Citizens for Constitutional Local Government, Inc. is an attorney nor is employed by an attorney.

Another HOA enlightenment bill has been proposed in Colorado, 22-1137, joining California’s and Arizona’s legislation to restore homeowner fundamental rights and freedoms.  Reading the bill as introduced, it addresses a number of issues designed to provide meaningful due process, to good extent, allowing for small claims adjudication and restrictions, limitations on the HOA’s right to fine, interest charges, late payments, work-out plan before foreclosure, and limits on the amount of collection to just 3 times amount owed (avoids unusual and cruel punishment charges).

What more can a homeowner ask for to obtain justice and fairness within the HOA government? Go for the bill! Support it!  Get what you can before the evil empire strikes back and whittles the bill down!  Yet, to my disappointment, a homeowner advocacy group has found problems with this bill, all relating to how it would cost the HOA more money.

What is needed, as I’ve repeatedly argued, is strong support for the sponsor, Rep. Naquetta Ricks, and an outpouring of emails to the legislators, especially to the committee members who will hear the bill.  If there is a Request To Speak option at the legislature, sign up and use it!

In a broader view of HOAs as private, separate local governments keep in mind what has been ignored and bypassed by state legislatures across the country, including Colorado. Why are there private HOA governments when there are public home rule, charter governments?

All the states have a version of home rule that varies in the degree of independence granted to a local governments and under what terms.   Given this existing legal mechanism for strong, independent  local control, why was there a need for the creation and approval of, and the support for, private government HOAs?

Why are there private HOA governments when there are home rule, charter governments?

Getting down to the issues of state laws relating to local governments, let’s examine the doctrine of home rule. Under the home rule doctrine local communities are permitted a large degree of independence even to the extent that state legislative action is not necessary. What is home rule? In simple terms, it is a grant of authority and power — of independence — from the legislature to local communities.  (See HOAs violate local home rule doctrine and are outlaw governments; AZ Supreme Court, Tucson v. Arizona, CV-11-0150-PR (2011).)

All the states have a version of home rule that varies in the degree of independence granted to a local governments and under what terms. Check your state laws under home rule or charter government. Strict states treat the home rule powers strictly as set forth in the statutes, like agency enabling acts. Most states have allowed for wider freedoms to local home rule governments, with some allowing for local government charters functioning as a local constitutions.  In all cases it’s a grant of independent governance from the legislature on local matters.

“The purpose of the home rule charter provision of the Constitution was to render the cities adopting such charter provisions as nearly independent of state legislation as was possible. . . .  ‘[A] home rule city deriving its powers from the Constitution is independent of the state Legislature as to all subjects of strictly local municipal Concern.’”

Given this existing legal mechanism for strong, independent  local control, why was there a need for the creation and approval of, and the support for, private government HOAs?  Could it be as Prof. McKenzie stated in his 1994 book, Privatopia? “CIDs [HOAs/POAs/RCAs] currently engage in many activities that would be prohibited if they were viewed by the courts as the equivalent to local governments.”

It’s obvious that it was not to create healthy, productive communities.  Was it a business venture from the start to make profits for the originators masquerading as a public serve and benefit?? Was it for the real estate agents and the home builders, and to cut state government costs?

The effective management of a political community, as are HOAs, and remain part of the greater political communities of their state and federal government, necessitates a rejection of the HOA legal scheme and its protectives laws.    There are no legitimate reasons why HOA governed communities cannot exercise effective and productive self-government while  being subject to constitutional law under home rule statutes.

Home rule doctrine existed long before the advent of the HOA legal structure in 1964. That is not to say that it would have solved all problems and be a perfect government, but it would be a government under the Constitution, part of the Union,  like all other forms of local government.

If the initial 1964 HOA concept had included home rule provisions, then there would be no need for a restructuring.

living in HOAs and suffering abuse, financial and emotional distress as a result of BODs being  protected by Arizona laws. These abuses are easy to understand and support! (See HOA Common Sense: rejecting private government and The HOA-Land Nation Within America).

A quick and simple — but highly effective — bill that was proposed in March 2011 and will bring relief to homeowners being treated a second-class citizens by state laws in support of the HOA legal scheme. It was ignored by Arizona advocates and dismissed by the Legislature.

“No provision of any contract or any declaration of covenants, conditions, and restrictions . . . is enforceable in this state unless the party seeking to enforce the provision proves by clear and convincing evidence that 1) the provision being enforced was knowingly and voluntarily agreed to by all parties . . . . Any representation or statement offered as clear and convincing evidence . . . shall include a signed statement containing the following, beginning with “I understand that I can ask that the following be read and explained to my satisfaction.”

“So reads an excerpt from my proposed “Truth in HOAs” statute that should be made law in each and every state. That is, if indeed the legislature stands by the Declaration of Independence and the US Constitution, which we are hearing so much about in the media nowadays.”

The “The Truth in HOAs Act,” as I called  it,  allows each state to modify the proposal in accordance with its state HOA/condo acts — shown in square brackets [].  Also, subsection (3) contains a list of acknowledgements  that can be tailored to each state’s advocate lobbying efforts.  See Arizona Truth in HOAs statute (pvtgov.org).  The essential bill section is contained in subparagraph (4).

“Therefore, in reference to subsection 3(d) above, the CC&Rs or Declaration for any planned community, condominium association or homeowners association shall state that, “The association hereby waivers and surrenders any rights or claims it may have, and herewith unconditionally and irrevocably agrees to be bound by the US and State Constitutions and laws of the State as if it were a local public government entity.”

The real estate subdivision or condominium will not be affected by requiring HOAs to join with other forms of local government and be subject to the Constitution as a home rule entity.  See HOAs violate local home rule doctrine and are outlaw governments.

This 2022 legislative session offers a unique, one-time opportunity to get the message across and to educate the legislators. Remaining silent on the issues only plays into the pro-HOA hands of CAI and offers excuses by the media not to cover HOA abuse.  Not only will you find “ammunition” in support of your arguments as contained in the 2 above publications, but also in my Arizona Supreme Court  amicus brief filed and accepted in Tarter v. Bendt (see note (vi) in Can HOA members expect justice in Arizona courts?).

My arguments are summarized in the Commentary.  As is my approach, my arguments are supported by legal authority and hard evidence documents, which CAI ignores and YOU lose!  They must be exposed if the legislators are to be fully informed on the reality of HOA-Land.  As leaders who are internet publishers,  actions speak louder than words!

I have strongly and repeatedly argued that the HOA declaration of CC&Rs is a devise — a legal maneuver — by real estate interests to avoid the application of the federal and state constitutions to HOAs.

The word “may,” as found prolifically in HOA statutes, serves to legalize acts  and powers of the private HOA  entity in a round-about, subtle manner. Without the use of the “may clause,” an act of the HOA can be challenged as illegal even though it is stated in the declaration agreement that is treated as a contract. Thus, state legislatures avoid a constitutionally mandated enabling act that delegates authority to any agency or public-private entity.

The acceptance of home rule doctrine and statutes, by all states, would seem to negate any justification under judicial review for creating special laws for HOAs.  Home rule offers an alternative measure to satisfy any genuine government interest, thus making HOAs unnecessary.

So it appears that businesses can fail as well as cities, towns and states but, heaven forbid, not  the private HOA government. 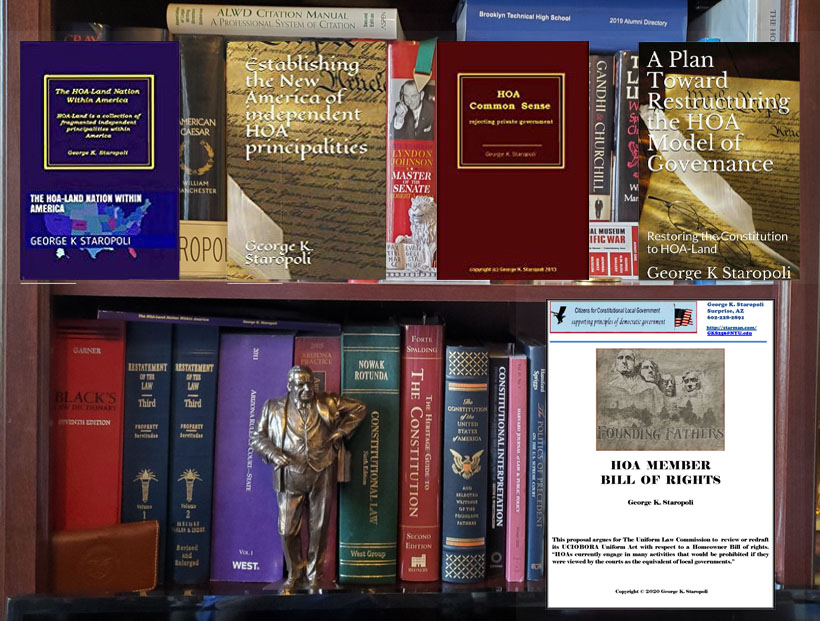 Listening to the events concerning the shooting in Brooklyn Center, MN I was surprised to learn that its form of government is based on the council-manager system.  We are more familiar with the mayor – council or mayor – manager forms of local government where the mayor is elected and plays a major role in governing the city.[1]

However, in the council-manager form the mayor is a figure head with the powers to rule the city are divided between the elected city council and a city manager  appointed by the council.  Sound familiar?  Many HOA Bylaws follow the council-manager form of local government, except that the Bylaws do provide for corporation laws governing the duties of officers.  This is true of the many large HOAs and the retirement/resort subdivisions.

The division of labor and authority follows the public form in that the council holds ultimate responsibility for the conduct of the government but is restricted to policy issues, while the appointed manager actually runs the HOA. A good example can be found in an Arizona active-adult HOA of some 17,000 people.

“Subject to the Board’s responsibilities concerning operational policies, it shall be the policy of the Association . . . that the Board refrain from unreasonably interfering with the performance of delegated functions by CAM.”

The major difference between local public government Brooklyn Center, MN and the Arizona HOA lies in the private contractual nature of the HOA that absolves it from application of the US Constitution as well as the state constitution. HOA members are, as compared to non-HOA members, therefore second-class citizens lacking constitutional protections within their own state.[2]

The $64,000 question is: So why is there so much opposition to requiring the HOA to be subject to the Constitution like all other forms of local government?  BEFORE you respond, think very carefully with respect to the implication and consequences of your response.